From pubWiki-en
Jump to: navigation, search 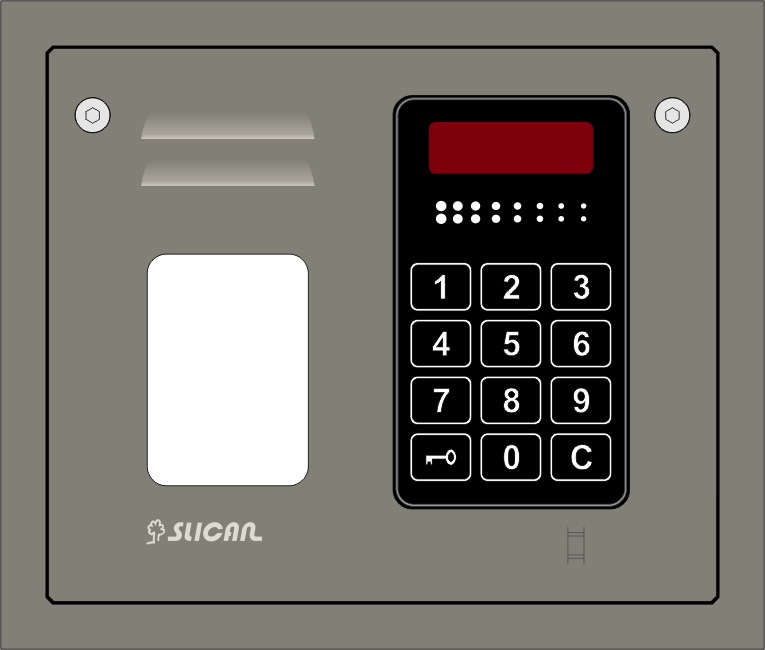 Differences between doorphone system HAS-3000 and HAS-3000T

In following table the differences between doorphone system HAS-3000 and HAS-3000T are presented.

Digital doorphone system Slican HAS-3000 and HAS-300T are modern, elegant and reliable solutions mainly for apartment buildings (multiflat – one cassette is used for one staircase), as well as for office biuldings.

Housing of doorphone cassette is performed using high quality materials, durable and resistible for wether circumstances. There are two types of cassette - for under-plaster (KD12P) and over-plaster (KD12N) mounting. Cassette elements - for both cassette are identical. In model HAS-3000T cassette is equipped in socket for touch memory. 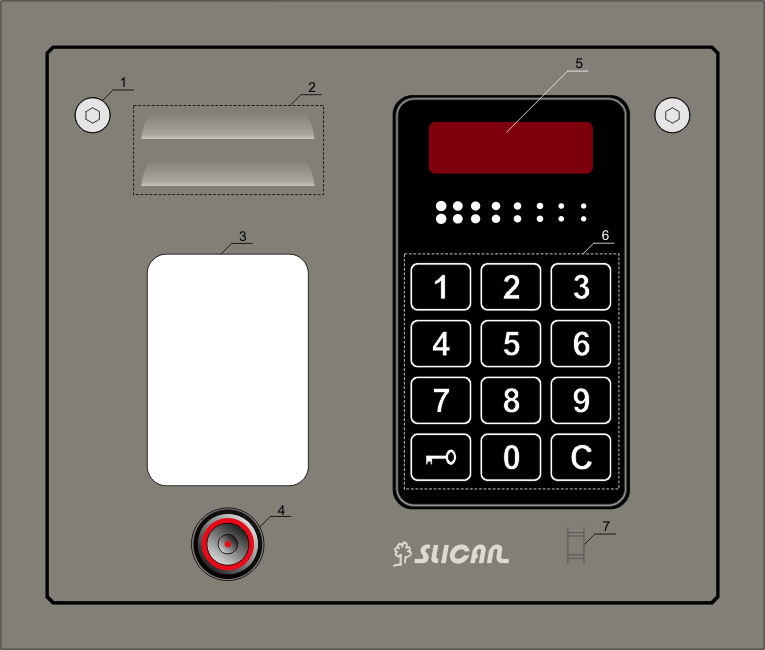 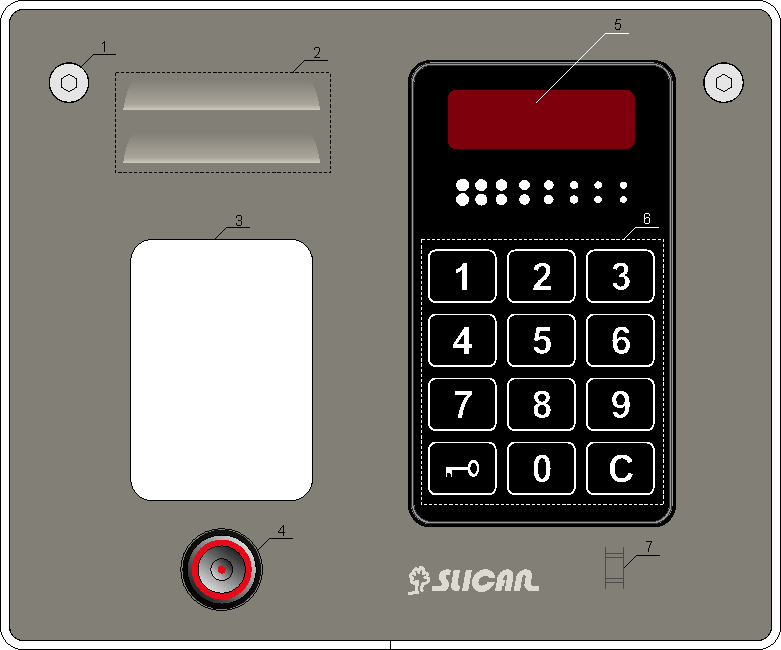 System cassette enables to utilize user and service functions. In cassette, legible and contrast LED display is included, as well as modern and durable touch capacitive keypad. This keypad assure precise and audio confirmed selection of every key. Backlighted keys enable to comfortable using kepad even in total darkness. Due to no metal contacts in kepad, long proper device working is guarated. Backlighted window for apartments list enable to show all needed information.

System connects with uniphones installed in apartments using 2-wires databus, it enable to adapt existing cable infrastructure. Additionally it enables to decrease costs of such wiring.

Due to using modern technologies doorphone system Slican HAS-3000 offers wide range of functions – below you can find most important system features:

Dimensions of niche for KD12P cassette

Mentioned below dimensions are in mm: 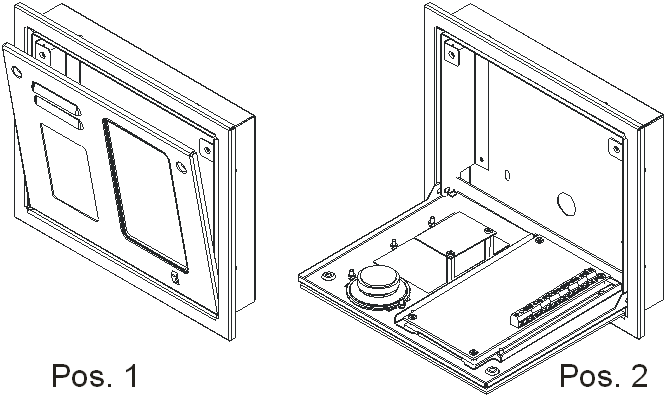 Because all uniphones are supplied by common wires, they should be good quality and fulfil following conditions: 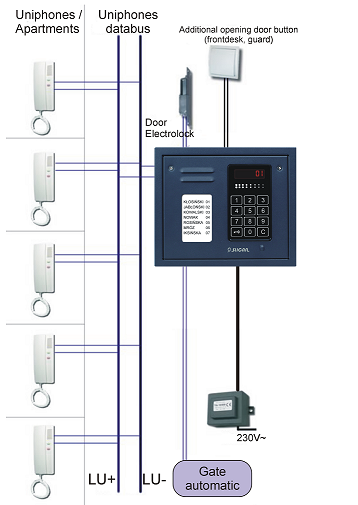 Slican HAS-30XX systems can operate with digital uniphones of other manufacturers (Proel and Urmet uniphones were tested: they works properly but doesn't support full functionality of system Slican HAS-30XX) with address decoders.

In our offer there is specialized digital uniphone Slican US.P2W-HAS255 in gray colour, with two buttons, signaling LED diode and i ringer volume adjustment.

Most frequently used doorphone function is call from doorphone cassette to apartment (uniphone). Below you can find method of do it:

Procedure of establishing call from uniphone to doorphone cassette is following:

During call it is possible to:

Call is disconnected after hang-off the handset or after pressing C key on keypad.
ATTENTION! Maximal time of call from uniphone to doorphone cassette is limited to 30 seconds (function is available after 45 seconds after switching on power supply).

It is possible to open gateway using uniphone – this function is supported only by two-buttons digital Slican uniphones and can be realized using second opening button.

It is possible to open door when the call is not established. To do this you should lift handset and two times quickly (with pause no longer than second) press open door button.
ATTENTION! This function is active, if no call is established.

Procedure of opening door is following:

Doorphone systems HAS-3000 and HAS-3000T include "Free access" function. This function is specially useful for public access location which is located in building protected by doorphone system ex. surgery. If such apartment is defined as public access location (option P3.2/L2.2 - see chapter HAS-3000 and HAS-3000T system programing), after lifting uniphone handset in this apartment, dialing number of this apartment on doorphone keyboard results with door opening. For uniphone handset on hook, standard ringing procedure is realized and answering call is obligatory before opening door before opening door. If apartment is not defined as public access location, after dialing apartment number from doorphone keyboard procedure of calling wrong hang-off uniphone is realized (see chapter Calling wrong hang-off uniphone).

It is possible to change premise PIN code using keypad. Procedure is following:

This sensor is used to immediate switch off electrolock after detecting door opening.

Closed - it is default mode of electrolock (NC) – when active electrolock is open. This terminal can be also configured to dialing specified apartment (See programming table: Admin level).

Is used for immediate opening door – by short connection to the ground, without using uniphone. This terminal can be also configured to dialing specified apartment (See programming table: Admin level).

To define specified apartment as free access location, which could open door directly from doorphone keyboard without entering PIN code it is necessarily to execute following operation:

If apartment is defined as free access location and:

For every apartment, there is possibility to add maximally 9 RFID pastilles. Procedure of adding pastilles is described below:

Added pastilles can be erased from doorphone. Unfortunately it is impossible to erase only one pastille. All pastilles registered for specified apartment are erased in one step. Procedure of erasing pastilles is described below:

Working environment of HAS-3000

It is strictly forbidden to instal doorphone in following permises:

We thank You very much for purchasing Slican product. Our company will do all the best to fulfil Your expectations concerning purchased product, so please inform us about Your ideas concerning improve product.

If this manual doesn't fulfil Your expectations, please send us information what chapters should be added or extended.

We wish You a nice and problemless doorphone using. 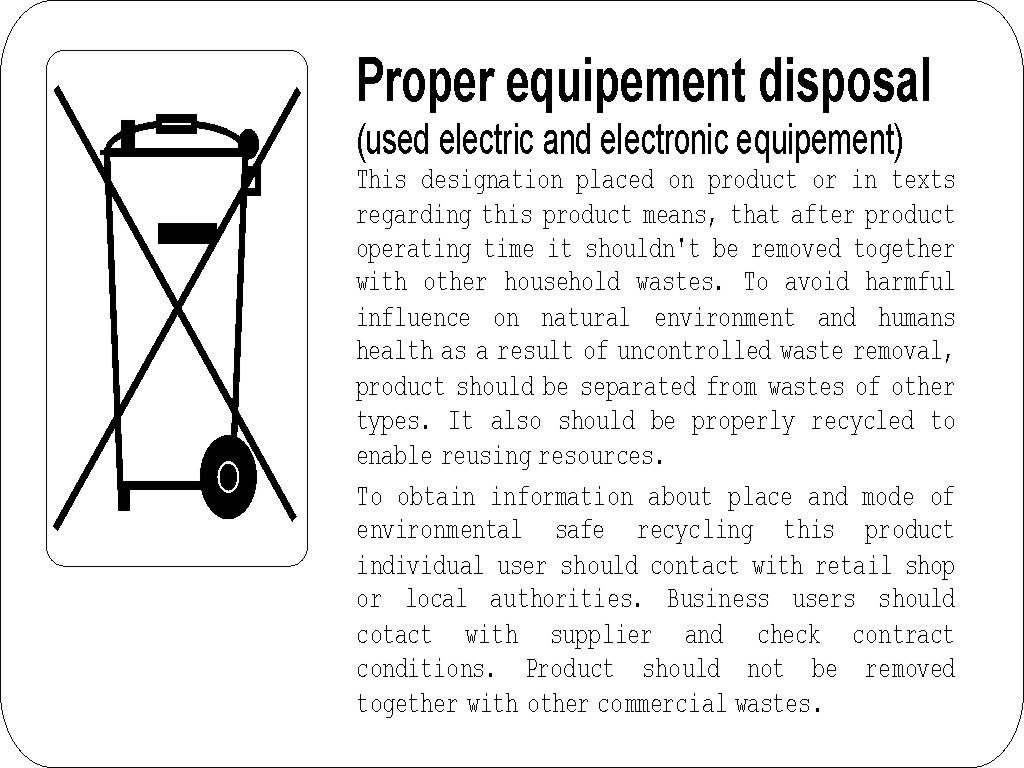